Ever since moving to West Marin sixteen years ago, I have been drawn to the local hummingbirds. We have Anna's year round and migrating Allen's and occasional Rufous in the Spring and Fall. We had so much traffic our first year that I stood next to my feeder and waited for them to come around. They would fly close to me and I could feel the wind of their wings on my face and hear their buzzing wings in my ears. I would look them in the eye and feel a sense of connection. A sort of questioning look and eventual trust as I got them to land on me. It took a lot of time and patience but they eventually warmed up to me. I've spent hours over the years standing by my feeders watching and waiting for them, sometimes being rewarded with 3 to 4 hummingbirds sitting on my fingers at once! This hobby can become quite addicting especially during migration and high traffic time of year. Evening hummer happy hour is my favorite time of day.

I bought more feeders over time. It seemed like the more feeders there were, the less fighting amongst the birds. Next, I decided to attract more hummers to my house by placing even more feeders around my deck to entice those flying by who might not see the feeders tucked under my roof. I found that the McCormick brand spice jars were perfect for the job. I had recently cleaned out my pantry and pulled some spices that were very old and stale off the shelf. I emptied them and soaked the jars in boiling water to loosen the labels and sterilize them. Next, I drilled holes in the red tops. McCormick has designed a top that comes with a snap lid with an inner lid with pre-made holes. How handy! Remember, if you drill your own holes, smooth out the edges with a file.

After I had made 4 of these little jar feeders, I placed them on my deck and on the arm rests of a couple of deck chairs. It wasn't long before they were discovered by the hummingbirds. Ants also discovered them so I placed them in shallow bowls of water to discourage the ants. Hummingbirds like to sit on the lip of the bowl and rest while they eat.

Now the fun begins! Once the hummingbirds were used to eating from the feeders on the arms of the deck chairs, it was an easy bit of persuasion to get them to feed from the jars while holding them in my hand. I no longer had to stand at the feeder with my arms raised high. This was so much more relaxing. 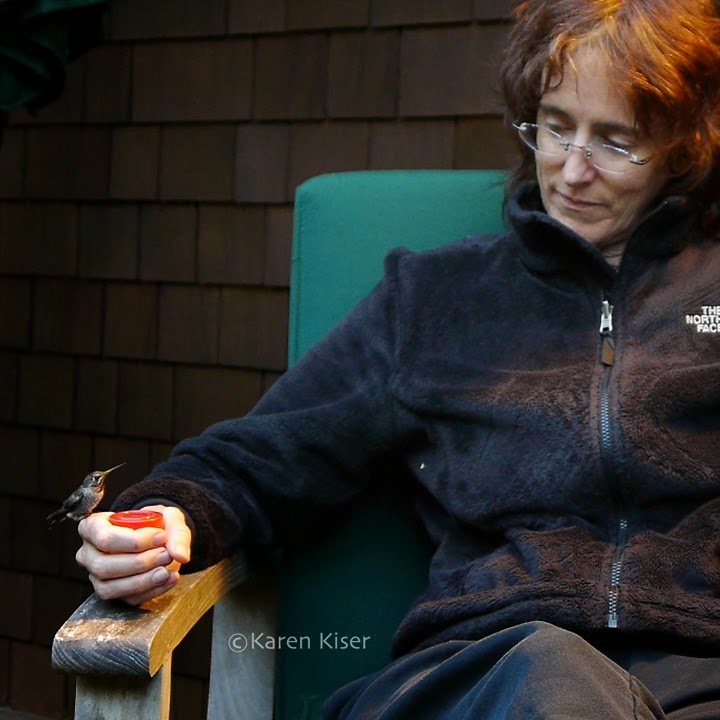 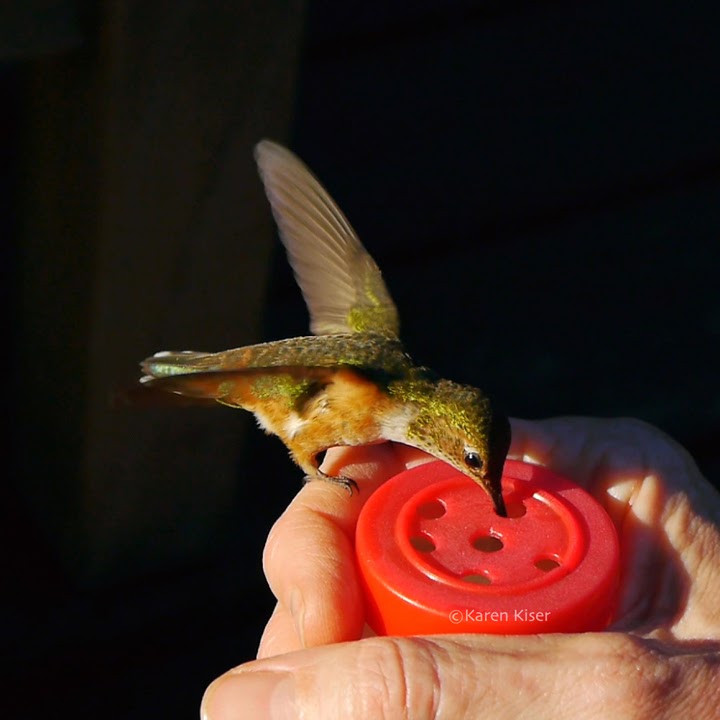 If you are fortunate to live where hummingbird traffic is heavy and they swarm around feeders, the jar is your ticket to a magical close encounter. In the video below, it took about 5 minutes before I had a few visitors to my feeder. That's not a very long time to wait and the rush of standing in the middle of a hummingbird swarm is pure happiness! Scroll 2/3 way through for the close up! Turn up the volume!

If you would like to make your own hummingbird food, here is the recipe:
1 part sugar
4 parts water
Boil the sugar water until the sugar is completely dissolved. This will also kill any mold or bacteria that might be present. Do not boil longer as that will make syrup and change the water/sugar ratio. Never add red food coloring. That can make birds sick. Wait for the water to cool before filling feeders.

I hope some of you get a chance to try this inexpensive method to get close to these little jewels.

Thank you for the video. It was so enjoyable.

What beautiful days you have

Thank you for giving others this blessing. In my despair & illness, I will find much joy in this! Bless you 1000-fold.

This video is absolutely amazing. I am going to round up my spice jars and have a go at this. Thank you so much for making my day.

My friend and I are going directly to my pantry to find jars. She's been wanting to hold a hummingbird for a long time. Thank you for sharing! You made our Monday!

So awesome of you to share. Thank you and I really love the fact that you also gave the recipe for the homemade nectar....I tell those that are just starting to remember by.looking at their hand....4fingers and 1 thumb...that is the ratio....thanks again :)

Thank you so much for sharing this message plus the video. They are so super cute. And I have them here also. All this time when I ran out of spices. I take the jar and just throw it away. Not ever again will I do that. They are going all around my house lol and my hand going have to try this with my 20 year old son. And 28 year old daughter. I just love this. Again thank you so much for the share. This is one outstanding video I have ever seen. God bless and your family.

Do bees
take over?

Bees get thirsty too and will also feed on sugar water when they are having a hard time getting nectar from flowers. I bend in favor of letting the bees have what they need too. It usually is a temporary invasion.

The bee's take over in my area(Ohio) right around the time migration south happens. So I have Glass pie pans of 2parts water: Karo syrup for the bee's, and they tend to be mostly ok. Someone said to have a light coating of Vaseline around the nipple, bugs don't like the feeling..

It is so amazing to watch your video. I live in Maine and I think we have two hummers, I make the nectar and hang it just outside a window. I love to watch them. Once in awhile when I'm out there I hear their little wings motoring. To see so many at once would be wonderful, I would love to feel their little feet landing on my wrist as they do in the video, I bet it feels so delicately light and to see them sitting still and up so close.....how wonderful.

Thank you so much for All the Great Advise!!!

Wow, awesome! I live in the dry part of Texas, but I do get fo see a few of these beauties around here. I love your video ,thank you for sharing

If you want a party of them. Just fill the lid of a red jar lid of of mayonnaise or whatever. Lay flat in your hand.

it's all about the water, what kind you use. they love water, and they love people who love water, today i almost drowned, the hummingbird flapped his or wings, "are you okay?' later it came and rested.

I love hummingbirds and we have at least one that comes around in our Rose of Sharon..the bush has white flowers so the scent must attract them as well..it is early April and I have hung the feeder outside already...we live in sw Michigan..I don't want to be caught unaware 😏